The Lepturine Longhorn Beetles (Cerambycidae: Lepturinae) of the Pacific Northwest 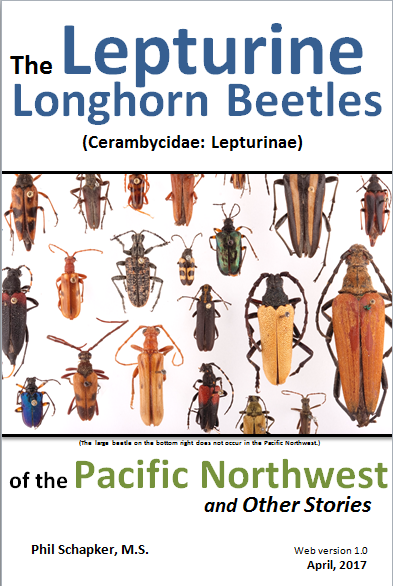 The current work is a continuation of a chapter from my MS thesis at Oregon State University, completed in Sept. of 2014.  Much of this version is copied directly from that document with several additions and corrections to the text, and a number of new photographs.

The intitial goal of my thesis was to create a field guide to the PNW lepturines that was useful both to amateur enthusiasts and to scientists in need of a more detailed technical resource.  Unfortunately, the work was forshortened due to time constraints for finishing at OSU, and my ultimate pursuit remains a work in progress.  After a brief hiatus from active research, I’ve taken back up the effort.

The key to genera is largely based on Linsley & Chemsak’s two-part monograph published in 1972 and 1976. It is currently undergoing testing with the intention to incorporate simpler language, a glossary, and photographic aids.   I would greatly appreciate any comments, ideas, corrections, or additions.  Feel free to email phil.schapker@gmail.com.

Acknowledgements:  Special thanks to Brady Richards for his meticulous help in proofreading the present draft and getting it up on BugGuide.  Also to my former adviser, Chris Marshall, for his continued advice and mentorship, and for allowing me to use the resources of the Oregon State Arthropod collection to conduct my research and photograph specimens.